How it all started.

I, Hans Rademaker, designed and built my own coffin-cum-bookcase in 1993. It was one of my graduation pieces at the Utrecht School of the Arts. At the time there was a large taboo surrounding death, it wasn’t something you talked about. A funeral was clinical and impersonal. As a reaction to that I wanted to make death part of life again. I needed an icon to get the discussion going. That ended up as my coffin-cum-bookcase. And it certainly got people talking, even resulting in an article in one of the Dutch daily newspapers Trouw.

Soon after the article appeared I came into contact with Walter Carpaij. Several exhibitions followed and 2 years later Walter Carpaij and Nicole Capaan began De Ode funeral parlour in Amsterdam. Together with them I designed the first bier, the Gizeh 200. Many of the features typical in a Ibis coffin come from these first 2 models.

René Fleur made an important contribution from 2001 to 2006, creating Ibis’s logo and house style. René and I designed the Luxor and Thebe models together.
From April 2006 René has moved on to designing toys and the interiors of care homes.

I continue to promote Ibis’s philosophy, extending the range of coffins and increasingly focussing on designing special funeral memorials. 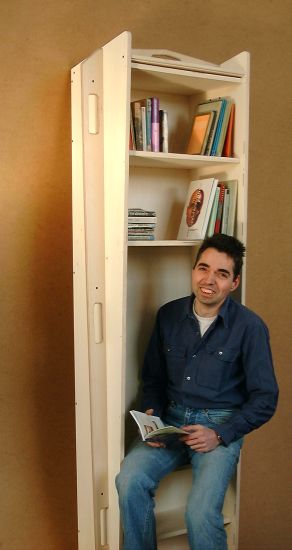